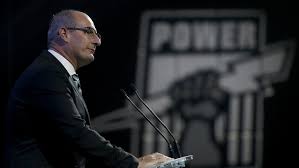 The New World of Strategic Communication

David Koch, President of the Port Adelaide Football Club and Breakfast TV Presenter, recently became recognised on how NOT to communicate to open forums in today’s operating environment. In summary, shortly after Port Adelaide were kicked out of the 2017 AFL Finals race, President Koch openly suggested that some of the team selections were wrong, some players attitudes were unprofessional and those who didn’t ‘bleed the guernsey’ would be traded.

Effective strategic communication is not like it was 20 years ago. The model David Koch deployed, the message-influence model, is a linear form of communication that assumes the receiver will receive the message as intended without interference and that communication and meaning are synonymous. It doesn’t account for any complexity in the receiver’s environment whatsoever. Today’s more interconnected world, Web 2.0, simply no longer permits such a stable environment where your communications are in no way controllable and can be reopened for multiple re-interpretations, to multiple recipients, that all come back to the original sender. For David Koch, the result was a disgruntled coach, disillusioned players and a quick plane ride back to Adelaide to effectively ensure he had his coach for season 2018. The ‘message’ backfired big time and It could’ve been a whole lot worse.

The new model in focus for organisations and leaders today, the Pragmatic Complexity Model, expects the message to fail as its projected into a complex environment and then be replayed and re-interpreted over again. The strategy here is not control, it’s about context and subtlety. It’s about variation and understanding that less is more – that it’s more what you don’t say than what you do. In this world, deploying dominance, repetition and perception of control is no longer King, in fact it’s downright Dunce. David would’ve been better served to restrict his comments, play the subtle game and focus on the future, or at worse, briefed Ken Hinkley on what he would say offering the opportunity to Ken to provide feedback. No matter how correct or righteous David’s comments appeared, once your comments have lost control, have captured an exponential audience and are open for others to be re-interpreted, you’re in a world of lost in translation.

Modern communication strategies respecting Web 2.0 intricacies are vital in today’s operating environment. The wrong message, tweet, post or even Like can send organisations to the cliff in a matter of hours. Just ask United Airlines who for most of 2017 have struggled to fend and shake off multiple issues stemming from social media posts and the resultant poor responses from their CEO. This includes video showing one patron, a Doctor, being violently ripped out of his seat and then being chastised later by United’s CEO for displaying poor behaviour, and reports of mismanaging the outcome of a family’s pet rabbit that died in a United cargo hold. For the Port Adelaide Football Club, they could’ve lost a good coach that would’ve set them back decades in terms of on field performance, membership and merchandise sales and overall viability.

Strategic communication has gone from being an art form in chivalry and confidence to scientific endeavour in a matter of decades. Whether you’re an airline, construction firm, manufacturer or sporting franchise, a sound and robust strategic communication policy needs a systemic understanding of who your stakeholders are, how to best communicate to them and the level of their interdependence, impact and influence. Lighthouse Road supports organisations in developing this systemic understanding through rich picture workshops and policy development.