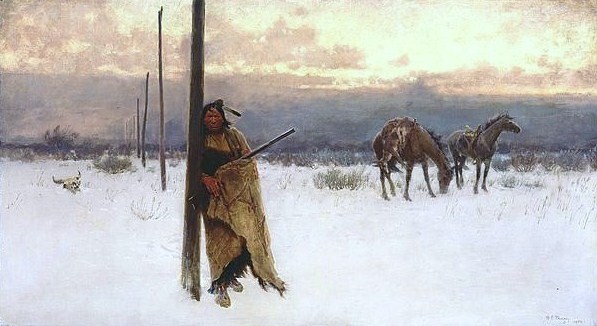 The American Indian and Digital Disruption

The joining of America from East to West via the transcontinental telegraph stands as a great example of the systemic impacts that can occur in the short and long term coupled with providing a few great examples for issues such as sustainability and disruption that are very relevant today and for our possible future.

The line of the proposed telegraph navigated through American Indian land and the builders, Western Union (WU), were conscious of the need to garner their support not just for the build phase but also for the poles to not suffer any damage or interference post-build. They sought the support of Shoshone Chief ‘Sho-kup’ who, fortunately for them, was an open and friendly leader with great influence. He ensured that his people would not interfere with the telegraph, who they wanted no association with at all. In fact, despite the benefits of the telegraph explained to him he was quoted as saying ‘why would I want to talk over wires when I’d rather talk to my people face to face’. To them this new ‘animal’ posed no threat and added no value to their way of life that had been sustained for millennia.

The telegraph would be constructed without opposition, but once up and running the opportunity ‘cost’ for the Indian soon became apparent. Combined with the build of the Transcontinental Railroad, the exponentially improved interconnectedness spawned a massive population growth across the Centre and West towards California that resultantly brought much warfare and conflict over resources with the native Indians. Coupled with this was the exacerbation of European diseases such as smallpox, measles and typhus that slowly destroyed their communities. For many historians, the Telegraph and Railroad are tangible symbols of American Indian genocide and with it all the lost stories and wisdom of an entire race. The other impact was that the famous mail service monopoly ‘Pony Express’ was instantly obsolete and was out of business 2 days after the telegraph was commissioned.

The lesson here is not so much that the current wave of disruption and exponential change being forecast is anything new, but as we head into our own new version of ‘exponential’ change with Artificial Intelligence, Robotic Process Automation, Blockchain and IoT becoming more mainstream, we must be cognisant of the potential system impacts, both short and long term, that it all could represent. I’m reminded of the saying ‘It’s not what you don’t know that gets you into trouble’ it’s what you know for sure that just ain’t so’. Chief Sho-kup thought the telegraph posed no threat to his people. He didn’t see its potential or even true capability in conveying instant messages over 1000’s of miles. His own biased and linear belief system simply could not see the impact of this exponential technology – he was effectively blind. To be fair, Indigneous people of all races have never truly sought change or transformation to extend their level of prosperity or way of life. Sustainability and deep connections with the earth achieved a balance that for them provided their own version of prosperity. It is neither primitive or more advanced than other cultures – it is simply an alternative. Today, in this modern world we operate within, the question is – are our own linear brains truly understanding where this is all going and how we need to constantly evolve? If you take 30 steps in a linear fashion – 1,2,3,4… you basically end up 30 metres from where you started, but 30 exponential steps – 1,2,4,8,16…you’ve travelled 26 times around the planet! That is the magnitude of change we are facing.

To confront the exponential threat and opportunity, it’s our contention that organisations today and into the future will need to be more open, active, flexible, organic and receptive to the world that’s operating around it. Maintaining mechanistic, closed, bureaucratic and linear organisational structures will not suffice in a world that is acting at a rapidly biological and exponential pace. Decision time, backed by hard data or good intuition, has never been more critical. Systems thinking, quickly becoming a mandatory skillset for tomorrow’s Leader, will enable mental models to be challenged and broadened, driving an environment that promotes both proactive and responsive decision making – more commonly known as a complex adaptive system. This will foster the ability to both respond to and influence change in an exponential world. Companies such as Apple, Amazon, Uber and Bitcoin are examples of those who have ridden the exponential opportunity and achieved unprecedented financial results. Alternatively, our modern versions of the Pony Express include Kodak, Blockbuster and Borders Books who have exponentially failed, suffering their own version of ‘Digital Darwinism’.

It is with some irony that we are now today talking about operating in a more biological environment, one that thinks systemically and having the courage to think less selfishly and more intergenerationally as part of our new operating rhythms and cultures; the very things our indigenous people were doing for thousands of years. Now their ‘stories’ and meanings are being reawakened in today’s corporate world, with the lesson that exponential disruption can be a serious threat to our way of life, but if we operate consciously and openly, it can also amount to an exponential opportunity towards achieving planetary equality, sustainability and prosperity.

The ‘Industry’ pages on Lighthouse Road’s website references many Indigenous proverbs that, while written centuries ago, are very relevant today in touching on our current challenges and inferences for a path ahead.

Shaun Deverson is the Director and Founder of Lighthouse Road.